We were pleased to attend the grand opening of the Redcliff Pressed Brick Park on August 27th, hosted by the Town of Redcliff and I-XL Ltd. Mayor Dwight Kilpatrick represented the Town, along with several Councilors and Town staff.

Clayton Sissons, President, Malcolm Sissons, Vice-President, and Graham Sissons, retired Vice-President, along with former I-XL colleagues from I-XL were also in attendance, including Allen Dillman, who was Superintendent of the Redcliff brick plant up until its closure.

The new park commemorates the Redcliff brick industry with three pressed brick manufacturing operations established in Redcliff. The first, Redcliff Brick Co. (later known as Redcliff Brick and Coal), was located at the south end of Main Street and established in 1907 by Mssrs Stoner, Lockwood and Wheeler. The first brick were produced in 1908 and Rudyard Kipling paid a visit. A fire struck the plant later that year. Mr. Arthur Woodcock, an experienced brick maker from Minnesota, came out to repair and operate the plant. He was soon joined by Ernest Sellhorn, another brick maker from Minnesota.

In 1910, the Redcliff Clay Products on Broadway was established by Mssrs Lussier, Farmer and Bryant. Arthur Woodcock’s son Fremont soon joined the operation but he enlisted and was killed at the Battle of Passchendaele. The old brick house at the corner of Mitchell and Broadway was the Manager’s Residence and plant office.

In 1912, the Redcliff Pressed Brick Company was established on the park’s current site by a group of shareholders that included James Hargrave, James Mitchell, Herb Sissons and families. Arthur Woodcock also became a shareholder, built the plant and became the first Superintendent. In operation by 1913, the first big project was St. Theresa’s Academy and brick were dragged across the prairie by horse and sled. In 1916, Herb Sissons married Hargrave’s daughter Lissa and in 1917, Woodcock’s daughter Aimee married Hargrave’s son Carl.

After the war, Carl came back and worked as press operator for the Pressed Brick before moving over to manage Redcliff Premier Brick, as the Broadway plant was now called.

So imagine this in the 1920s: Pressed Brick Superintendent Arthur Woodcock’s daughter married to Carl, running the Premier Brick while his buddy Sellhorn is running the Brick and Coal. It was the beginning of the Redcliff brick mafia!

The First World War years saw all the plants closed by decree. They bounced back and had reasonable sales during the 1920s. But the Great Depression started in 1930 and sales dropped. Our company records show that by 1935, the plant was only operating a month out of the year. The Brick and Coal took on the new name of Gunderson Brick and Coal in 1932 and in 1949 became Perry Brick and Tile Co.

The Premier Brick was effectively closed in 1941 and Carl Hargrave went to work at Domglass. In 1944, Pressed bought Premier for its gas well but market demand caused the plant to start up again. Post-war demand for building materials kept all three plants busy.

In 1965, a major modernization took place at the Pressed Brick with the installation of the tunnel kiln. The additional capacity meant the Premier Brick was no longer required and it closed in 1967 and was demolished in 1976.

Meanwhile, Perry Brick and Tile closed in about 1972. I-XL added a second tunnel kiln to the Pressed Brick in 1980 but the brick market declined after that and I-XL consolidated its manufacturing operations at the Medicine Hat plant and the last Redcliff Brick plant closed in 2004, ending almost a century of brick making in Redcliff.

To mark where the company began, I-XL retained a few elements and pieces of equipment and created this historic park. The mound covers the old periodic kilns. Artist James Marshall created the mural to depict the pressing, the kilns and the landscape view. He threw in the geese as extras! 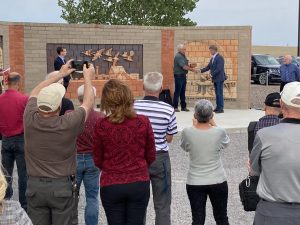 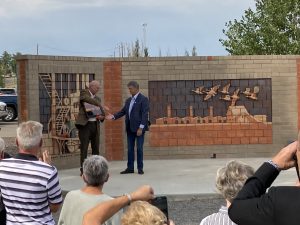 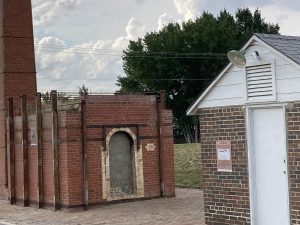 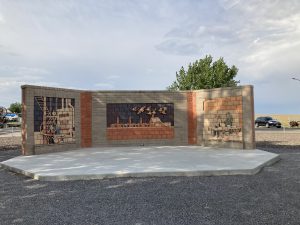 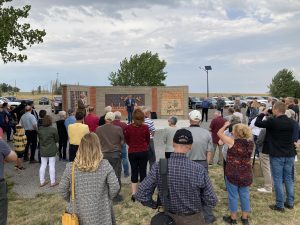 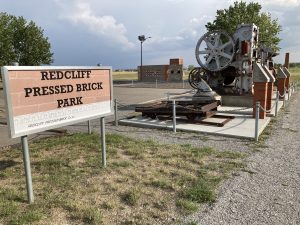